The papers I used were given to me by a good artist friend. Our group sends envelopes of papers to each other and we are to use them in a collage.  These orange, blue and text papers were from Laura Anderson. On the envelope she had written a note to look at the dictionary because the definition of "gloria" was there!  I included her note as a white area in the design, as well as my name from the front of the envelope. The only thing I wish I had done was leave the definition exposed when I covered the dictionary with gesso. 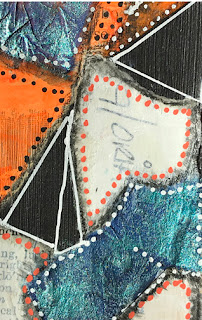 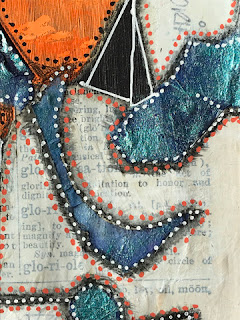 The other paper I added was a cutout of a head from a fashion magazine, when I saw an area that looked like a woman's top with one arm extended.  I had previously painted that page with black gesso as a background. When I tore and placed my papers, I noticed that some areas formed a triangle, so I tried to make as many as I could follow that shape.  I used a glue stick to stick things down. Then I painted over the dark blue pieces of crepe paper with Stewart Gill's Byzantia Jewel Tone Metallic in Aegean and I had already put a thin layer of gesso very the text and white envelope pieces. I painted several areas that were white or text in Liquitex Acrylic Artist color in Fluorescent Orange to balance the large orange paper on the upper left corner and some orange smudges on the musical piece.  Then I added the black, white and orange dots with Posca Pens. There are two flaps that I can add a secret message under!

The second piece was a 10 minutes "grab a random magazine page and create a collage to show a feeling of INTIMIDATION". 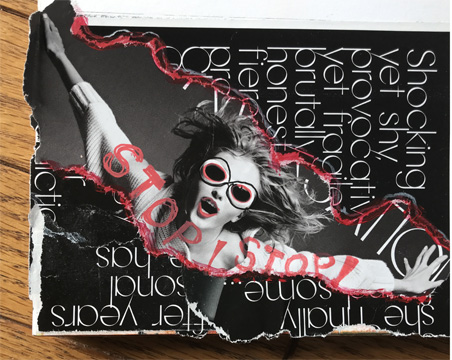 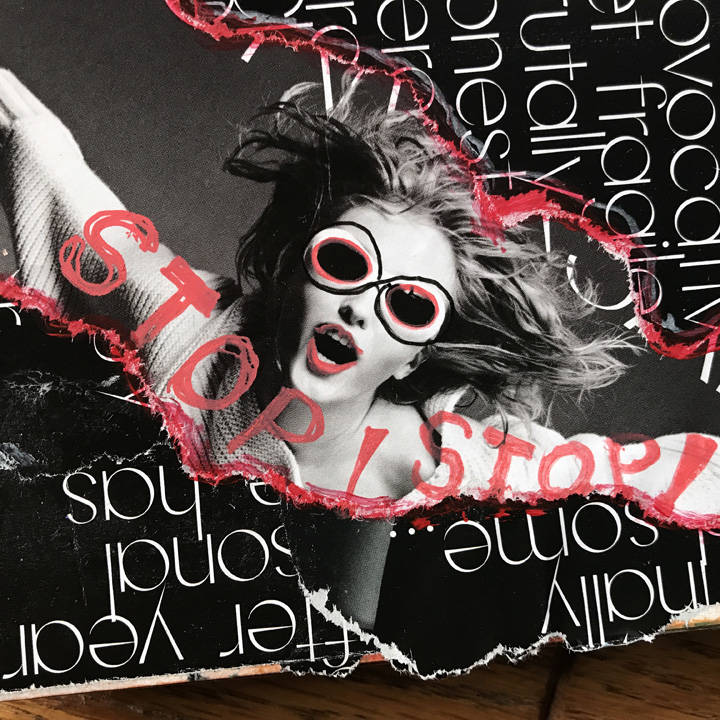 Have a good week!

Thanks for leaving me a message. I so appreciate hearing from you.

Gloria j Zucaro
I am a mother, daughter, sister, and friend. My father was in the US Air Force, so I have traveled quite a lot before I finally settling down. Now I take occasional trips for workshops or to visit relatives in different states. I prefer driving if at all possible. I really love to drive because of the freedom of choice all along the way. I hope you enjoy my blog.